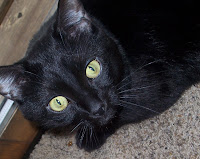 If you missed Part 1 go here.

So the kitten had been found. What a relief. I couldn't take anymore tears. How could they, Blonde 2 and 3, be so attached to an animal that they'd had less than 24 hours? Ok, I'll admit he was cute.
Now that kitty had been found they had to get his "area" set up. Litter box, food, water. All necessities in the life of a kitty. Those Blondes were more than willing to do that. How long can this last? I was guessing not long. And I was right.
Kitty easily adjusted to life in our home. I would too if I was treated like him. He didn't have to do anything and those blondes doted on him 24/7. It didn't take kitty long to find his favorite sleeping spots. Sunning spots. That's all he needed.
Well, the newness did wear off. And kitty became cat. Now I have to ask, plead and threaten those girls in order to get the cat chores done. No one wants to feed him. Or water. Or change the litter box . Eeww! And, yes, I must admit that I've been known to take care of that cat. More times than I care to admit.
It didn't take cat long to find his favorite night-time sleeping spot. Our bed. Lawman was none too pleased about that. However, he's adjusted to it now. No problem for him. Cat is on my side of the bed at my feet. Same spot every night. He moves to the floor as soon as my alarm goes off in the morning. He follows me to the bathroom and waits by the shower. He jumps up on the counter just waiting for me to turn on the sink so he can get a drink. He follows me to the kitchen when I make coffee. He doesn't drink coffee but he knows he'll get his morning kitty treat. Isn't he spoiled?
Then he checks the weather. That's right. He surveys the outdoors from the patio doors. And while he's doing that he's also considering his daily hunt. Squirrels, birds, bugs, blowing leaves. He thinks he's a hunter. He's never brought back a kill unless you count the little mouse he got in the garage. That was probably more of a playtoy though. He just tossed it around enough to cause battle wounds. I had to finish it off. Does that make me the hunter?
Then there's the neighborhood cats. He's always watching them. Like he's on the prowl. Somtimes he chases them. Sometimes he befriends them. Just depends on the day. One day this week he got caught. Lawman caught him under the deck with another cat. Lawman said, "I don't know what he thought he was doing. He can't impress the girls. He's done lost his equipment."
Posted by Nancy at 7:16 PM