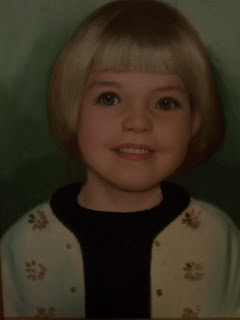 There is a war in Vietnam. My brother, Stuart, is a soldier there. Mom sends letters and photos to him. His little sister is growing up and he's missing it so she sends a photo. Stuart has made friends with another soldier in Vietnam who happens to paint as a hobby. Stuart shows this friend the picture of his little sister and he paints it.

There's no artist signature on the painting. I don't know his name.

I don't remember when Mom got the painting. I do remember the photo that it was painted from but I haven't seen it in 30+ years. I remember the outfit I was wearing. A cream colored cardigan with brown flowers on it and brown velour trim. The matching shell was made of brown velour also.

I remember receiving letters from Stuart. Many of which were written in 3rd person and always mentioned that he was fighting the bad guys to make the world a safer place for me. So I could ride my bike and play outside with my friends. I have several of these letters.

We would make tape recordings to send to him. The tape player/recorder looked like an over-sized phone receiver. I thought Stuart could hear me so as Mom would play the tape we received from him, I would answer his questions and honestly thought we were having a conversation. He would always ask about my dog, Fritz and my horse, Kitty. I think Mom still has these recorders and probably some tapes.

There were many other gifts from Stuart during his tours in 'nam. Necklaces of pearl and jade for Mom, a silk doll for me (I'll have to post a picture of this later), and more. A wooden box would arrive with his APO on it and it was as if it was Christmas morning.

Thank you brother. For your gifts, your love and your service to our country all those years ago.

What wonderful memories to have of your big brother! And what a great big brother he is... giving all of that attention to his little sister from half way around the world! I knew I liked him for more than the fact the he likes to play Nertz!! :) And the painting... do you have it now? I think it needs to be hung in a very prominent place... so adorable!!

What a sweet story! Love the painting, too. :)
xoxo,
Mary

What a wonderful post! The picture is beautiful, but I am sure the memories created were even better!