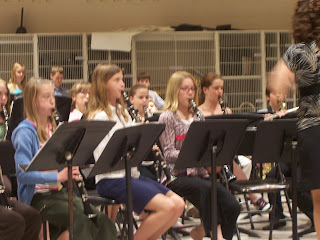 Saturday was the annual junior high band contest. Blonde 3 plays the clarinet in the 6th grade band. She'd tell you she doesn't like it but that's just because she doesn't want to admit it. She also plays the piano and she'd tell you the same thing about that. However, she never has to be told to practice. There are many mornings that we are given a concert before we ever get out of the house for school. See, she likes it that much.
For the contest she played with the entire band and also did a solo. Yes, that's right. She got up her nerve and performed on her own. In front of a judge. Brave soul, that girl. (I'd post a photo of her performing her solo except that my camera battery went dead!).
I'm happy to report that she did very well. She received a I-Superior Rating for her solo and the 6th grade band also received the same score. Play it again B3.
Posted by Nancy at 8:51 AM

Yay B3! How great that she loves music and is so talented! She will always have something to come "home" to...