It was my birthday and I can ask for it if I want...

Update - I had a request to show my birthday apron. Scroll to the bottom and you'll find it.
Several weeks ago, Lawman asked me what I wanted for my birthday. I had one thing on my list.
An apron.
Ok, pick yourself up off the floor. Are you done laughing yet? Lawman got a good laugh out of it too. So did my girls. An apron?
Was June Cleaver the first thing you thought of? Be honest.
I know that several decades ago aprons were part of the daily wardrobe for many housewives. Somewhere during the sexual revolution they were discarded. As were many other things. But, I do think they (aprons) are making a comeback although it may be more for the sake of a fun kitchen accessory than a functional item. My mom and grandma used to wear an apron.
During the late 60's my mom could be seen busy in the kitchen with an apron around her middle. She'd use it to dry her hands, wipe off the counter, etc. Granted, she spent an awful lot of time in the kitchen in those days. More than I do. She had hired men to feed at lunch. Her meals didn't consist of sandwiches either. It was a full blown meal -- meatloaf, pork chops or chopped steak with all the fixin's. Did I mention that she also made homemade bread and desserts? For lunch. Then she'd do a repeat for dinner. It's a wonder the gal ever had time to sit or sleep. Maybe she didn't. I don't know. I was a kid; I didn't pay attention to that sort of thing.
During the 70's and early 80's she wore what is called a cobbler's apron. It was a sleeveless top that snapped up the front. During these years she was working outside of the home but would don the apron to prepare lunch so she didn't get her work clothes dirty. Cooking was much easier too as it was just 3 of us; no more hired men. I don't recall her wearing aprons once I left home. I guess she didn't cook much at this point as it was just her and Dad.
Back to my apron.
I wanted it because I thought it would be fun. Yes, fun. Laugh if you want but I enjoy being in the kitchen. Puttering around, mixing, stirring, chopping, etc. is therapeutic for me. I like to cook. And more than cooking, I like eating. So does my family. They may laugh because I spend so much time in the kitchen but they sure do benefit from it.
(Look at these fun aprons.)
I guess I thought having an apron would inspire me to be productive. Sound crazy? I think it's something like getting up in the morning and getting dressed. Putting on the right attire so to speak.
I haven't had an opportunity to don my apron since I got it but I hope to be wearing it/using it on Sunday.
No, I won't be wearing pearls and heels like June either. Maybe just the apron. Ha. 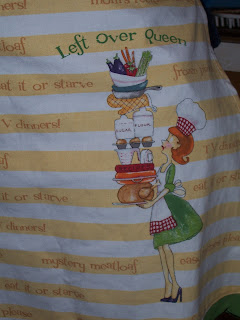 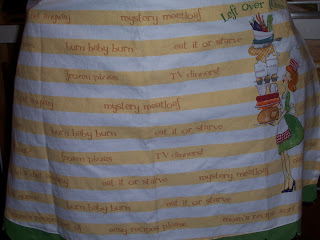 Labels: In the Kitchen, Vintage

Aprons are fun! I so want to get some cute ones one of these days, not just functional ones. But I do love my functional ones, and I've managed to save lots of clothes in the process. (I'm a messy cook sometimes.)

I love aprons, but it's more of a functional thing. I have a cute one, but really need to get/make another. Show us a pic of your birthday apron!

I think your husband would love to see you in only your apron.

yes, i might just have to make one of those myself.

Ellebee, watch later this weekend for a pic of my birthday apron.

dmoms, you're such a crafty gal. If you make one, be sure to share it on your blog.