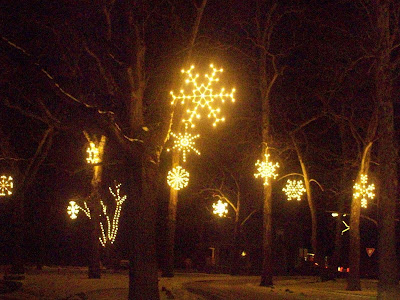 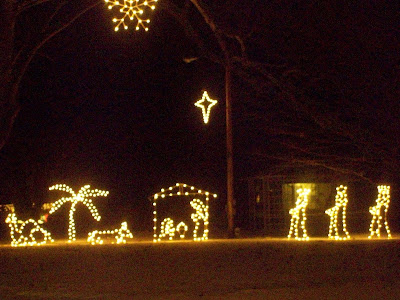 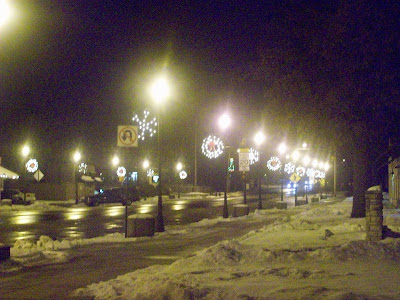 Our family has had an annual Christmas tradition as long as we've had babies.
Here's how it goes down. On the spur of the moment we ask the girls to get their jammies on. Now that they're older they know what follows. We all load up in the vehicle and take a little Christmas light tour of our town.
As tiny, little girls they were always so excited to go see the pretty lights. Now, at 16 and 13, it just isn't the same. I know they want us to continue the tradition but as teenagers they think it's corny, especially when I have to take pictures.
Lawman always enjoys the seasonal shakes from the golden arches so he suggested that we take a trip to the drive-thru. That didn't go as planned either. Girls thought they needed diet cokes instead and we vetoed that since it was nearly 9pm and they did not need caffeine at that hour of the day/night. And the battle continued but we won. We didn't visit the golden arches. That's how we deal with that.
Regardless, it was one more year that we continued the tradition. Lawman and I look forward to this each year and I know at some point the girls will look back on this with fond memories. I hope that it holds a dear place in their heart that they might want to share the tradition with their own family when the time comes.
Posted by Nancy at 4:06 PM

This is one of the few traditions my family held to when I was growing up. It was practically free and therefore affordable on a waitress' pay. I was always awed by all the light displays, but the simple white lights were my favorite. I still get choked up when I drive past those beautiful lights at Christmas time.

My kids have never been into it, though. When they were very small they were amused for a very brief drive if I could get dh to go along with the plan.

My December baby (and the baby of the family) is the one who likes the lights the most and will actually ask to go see them. Princess that she is, I think she likes imagining they're just for her. Maybe that's partly my fault. I've always played up how special it was to have a December birthday with all the extra lights and decorations no one else gets so she wouldn't feel forgotten in all the holiday rush and I could still decorate before her birthday.

I like the last picture. I say - just you and Lawman go next time. seriously.

last year we took the kiddos to see the lights, and they seemed to love it...so this year, i suggested doing it again this weekend, and my eight-year-old goes, 'oh mom, we did that LAST year!' i guess we'll have to review what the word 'tradition' means :)

I bet your girls secretly wish that you always follow that tradition even if they have to drive behind you in their own car with their own kids.

Okay, so when the girls are gone, and you and Lawman want to drive around to see the lights, you know who you can call to go with you!! I promise that I WON'T wear my pajamas, and I promise that Dane WON'T want a diet-coke at the Golden Arches...he would never pass up an eggnog shake!! :)

The kids will be finding that slip of paper in their advent calendar sometime next week. I hope they still enjoy it. However we do it a little differently. We bundle up after dark and take a flashlight walking tour of lights...

Just to clear some things up...
Originally, we had wanted diet cokes. Then, we just wanted shakes because we wouldn't go if we got diet cokes. But, McDonald's was closed. Somehow parents always seem to blame the kids :)
(that was for this morning on FB mom!)