"Miss Jeanette Bivens, one of the high school English teachers, was the Wave's faculty adviser. She was a quiet, precise woman who had been at Welch High School so long that she had also been Dad's English teacher. She was the first person in his life, he once told me, who'd showed any faith in him. She thought he was a talented writer and encouraged him to submit a twenty-four-line poem called "Summer Storm" to a statewide poetry competition. When it won first prize, one of Dad's other teachers wondered aloud if the son of two lowlife alcoholics like Ted and Erma Walls could have written it himself. Dad was so insulted that he walked out of school. It was Miss Bivens who convinced him to return and earn his diploma, telling him he had what it took to be somebody. Dad had named me after her; Mom suggested adding the second N to make it more elegant and French."
The above is a quote from the memoir of Jeannette Walls called The Glass Castle. It's a story filled with pain, poverty, and despair. It's also one of survival and overcoming difficulties. I'd venture to say she (Jeannette) would tell you Miss Blivens was a very positive influence in her life as well.

I found her story to be amazing. One that I couldn't put down. As I read this book, what I saw was the shortcomings of her parents. So talented and smart yet totally unable to be a responsible adult and parent. It was easy for me to see that because I've had a pretty easy life. I had a warm place to sleep, clothes to wear and food to eat. My hardships look like a day at the beach compared to what this family endured.

Last night, I heard Jeannette speak. She was wonderful. She was wise. She was funny. She was a teacher and a story-teller.

I was struck by a comment she made. I'll paraphrase.....every difficult situation has a gift wrapped inside if we will only allow ourselves to receive it.

Think about that. I can speak from experience and say that every difficult situation has taught me something. What doesn't kill you only makes you stronger, right?

She has come to terms with her past. She does not hold a grudge against her parents about what they did or didn't do during her childhood. She has learned how to find positives among all the negatives (a trait she might possibly get from her very optimistic mother). 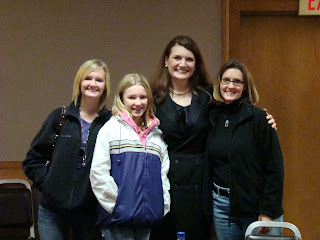 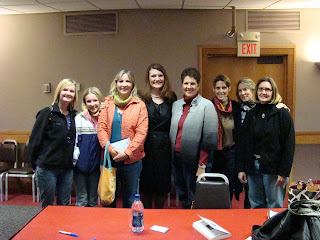 [left to right: The Bookclub -- (Honorary Members B2, B3), Rechelle, Jeannette Walls, Kim, Dina, Jenny, me]

interesting that I should just read this after explaining to the girls that sometimes we don't really now why things happen or better yet why God allows things to happen yet it always seems as if there is a reason. We were praying for a boy at their school that may have a tumor near his heart. He is very sick and has been in at our children's hospital for weeks.

I think it is really cool that you have your book club.

Oh hey! Are you that Nancy B. whose birthday is November 4th? I've got Rechelle's CD:o)

I read Rechelle's post about this book and author this morning and now I *really* want to read it. This is something I've been thinking about a lot lately due to some of my brother's art which I haven't posted yet. I'm still turning the thoughts over in my brain, but some of the things you said here are helping me to process them.