What a Crock | A Bread Crock 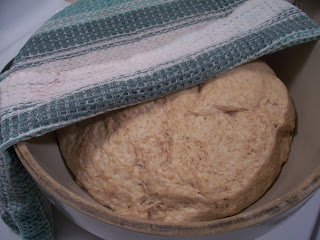 What a crock! Remember that saying? Well, I've got a crock for you. A bread crock. It belonged to my mother.

I think it's safe to say that my mother is a well-seasoned bread maker & baker. She hasn't done it in years but I think the term still applies. I mean, do you ever lose that talent?

When I was a little girl in the late 60's I remember my mother making bread on a regular basis. We lived out in the country, way out, so we didn't have the luxury of a corner grocery. Add to that the fact that we had several hired men to feed at least one meal a day, plus my dad and brothers and you know why she didn't buy her bread. We went through alot of it.

I like to bake bread but I'm not nearly as seasoned as my mother. I've made it from scratch and in a bread machine. I've never been quite satisfied with the way it turns out. About the bread machine - it tastes good but I don't especially care for the large square size/shape. About the bread from scratch - sometimes it turns out, sometimes not. I'm sure there are several reasons why that may be. It could be that my yeast isn't fresh, maybe my room temperature is too cool, maybe I used too much or not enough flour, etc. I remember my mother saying that it's something you have to do over and over again so that you learn "the feel of the dough." She knew that really well because I don't ever remember her measuring her ingredients. If I tried her method, I'd end up with large bricks.

Last night we were out of bread so I decided that I'd try my hand at baking some. Heather shared her recipe on her blog so I decided I'd give it a try. She bakes bread weekly so I was sure it was a tried and true recipe. Turns out my assumption was right. It's delish.

I got out my mom's bread crock to place the dough in to rise. As my bread was rising, I was talking to my mom on the phone. I told her there was wheat bread rising in her bread crock. I could hear the smile in her voice. She said, 'Oh, that makes me so happy to know that you're using it.' And that made me happy.

As a side note, while I was mixing my ingredients, I was wishing that they were more easily accessible. Denise had been thinking the same thing during her last bread making adventure and she did something about it. I may have to do a bit of re-arranging in my cabinets and on my counters.
Posted by Nancy at 8:01 AM

All I can say is I hope the lawman that lives next door never reads your blog. So far,he's been brainwashed into thinking I was a pretty decent wife. If he reads what you do for your family...the jig is up!

that last comment is funny. that is the same bread I made. I really like that recipie too. I'll be making more on Saturday. I hear you though on the sometimes it turns out and sometimes is doesn't. hopefully, the more we do it the more often it will turn out.

Can't wait to reorganize my cabinets and pantry now. BTW-i love the bread machine and use it 2x a week or so mostly for dough. X0

I used to use my bread machine all the time but I was like you, didn't like how it baked in the machine. I used it for dough for a long time until my hubby bought me a KitchenAid stand mixer! Now I do everything in my mixer and I love it! I make bread about once a week. For me it is about cost but also about therapy for me! There is something about mixing the dough, letting it rise, the way the kitchen smells while it is baking, how it tastes when it is still warm. I also just like that it makes me feel so domestic to make homemade bread for my family.

I;ll have to make some tomorrow.