Zucchini | What to do with your bounty

Do you have zucchini coming out of your ears? It seems to be that time of the season when those with gardens are wondering what to do with the surplus.


I received a box of garden bounty from a friend late last week ~ cucumbers, zucchini, tomatoes, yellow squash and cantalopes. I can't stand the thought of letting any of it go to waste so I've been doing my best to get it used up. (The produce visible at the top of this photo is only a portion of what we received.) 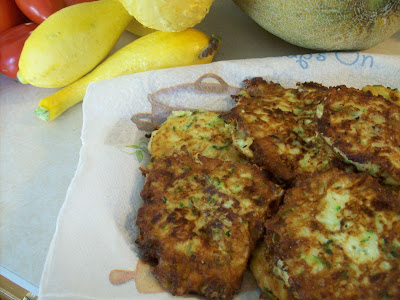 I baked 2 loaves of Zucchini Honey Bread yesterday and shredded the rest of it which I used today to make Zucchini Patties. My mother made a version of this when I was a kid. They're quite tasty and very easy. I like that they have a crispy outside and a creamy middle. 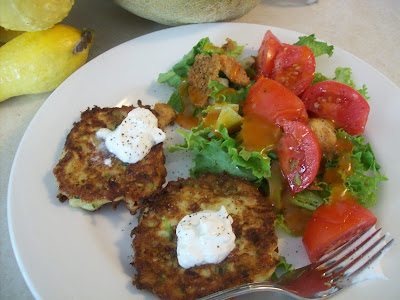 The first batch took about 3 minutes per side but the subsequent batches took less time to cook because the oil was nice and hot. We topped with a dollop of sour cream. Mmmm. So good.

Note: If you get tired of zucchini before it's all used, shred it and store in 2 cup quantities in a ziploc bag in the freezer. It's an easy addition to spaghetti sauce, stir-fry, lasagnas, soups, etc. or use in baked goods as you have time for baking.

Labels: In the Kitchen, Recipes

yep, I am doing some shredding today!

I am not sure my kids would eat those. They look good to me though : )