What happens in March? St. Patrick's Day, Easter (this year), and basketball. March Madness to be more specific. And before March Madness gets underway there are the conference tournaments. My alma mater, Kansas State University, is part of the Big 12. My niece, Marcy, and her husband, Matt, had two extra tickets and they were nice enough to invite us to join them at the Big 12 tournament on Friday. 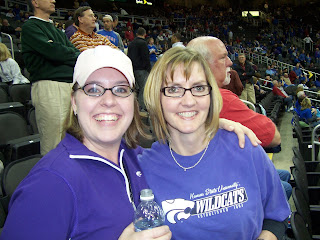 Here I am enjoying the game with Marcy. 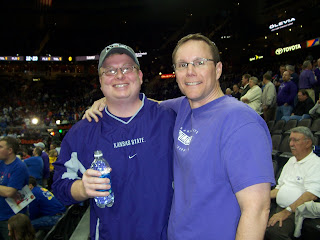 And I can tell you Lawman and Matt posed for this picture only out of fear of what might happen if they said no.

Did I mention that our seats were at half-court? A mere 6 rows from the court? That's right folks. I could literally make eye contact with the players. And you know I locked eyes with them. Not only that but I swear their sweat provided showers for us a couple of times. We were that close!

And there was a celebrity in our midst. Pat Riley, coach of the Miami Heat was just a few rows behind us. We hear he was there to watch KSU's Michael Beasley and Bill Walker. Guess he's thinking about NBA draft selections.

But, I'm glad to say that they received a bid to play in the NCAA tourney. That's been a long time comin'. They'll be playing in Omaha, NE Thursday at 6pm. I'll be on the couch with a diet coke and the remote for tip-off. I'll be cheering for the KSU WILDCATS!

That was almost the best day ever! Of course if we would have won it would rank #1... We almost have matching glasses. Who knew?

That will be a short cheer Nance. Best switch already to the dark side. KU! Woo Hoo!