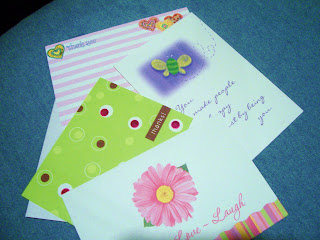 Hand-written notes. There's something special about them or at least I think so.

In today's electronic world, I wonder how many of us ever take time to write a note to friends or family. I do.

As a young teenager, I signed up for a penpal through TEEN magazine. My penpal was Tamara Broszus from California. We wrote each other regularly for years. I loved finding her letters waiting for me in our mailbox. In 1991 we met at my wedding. She was my guest book attendant.

Back to letter writing. It's almost a lost art in today's electronic world. We pay bills on-line, we communicate via email, facebook, chatrooms, etc. Does anybody ever send a letter via snail mail? I'm guessing that most people would say the only 'letter' they send is a birthday card. You can even do that electronically.

For years I gave up the art of letter writing but recently, I've started again.

My dad moved to a nursing home in January. He's never been one to like talking on the phone and due to health reasons, his voice has softened so it's difficult to hear him. I've started sending him a letter or note each week to keep him up to date on what's going on at our house. I know he enjoys receiving them; I've been told that they often times are the bright-spot in his day.

I have taught our daughters that the correct method of thanking someone for a gift is to send a thank you note. Since they've been old enough to sign their name, they've been sending thank you cards for birthday and Christmas gifts. It doesn't matter if they receive it at a birthday party from a friend or from Grandma & Grandpa, an aunt or an uncle. They all get a thank you card in the mail. There was a time when the girls would fuss about having to write a note but they've done it long enough now that they actually will do it on their own. When they were younger, I would have them write their thank you note before they could play with or use a gift item.

Letters can be treasured for years. Lawman and I have every letter we sent to each other when he was in Iraq and Saudi Arabia during Dessert Storm. I'll never get rid of them. We're keeping them for our girls. They're not allowed to read them until we're gone but at some point we want them to know that we did write love letters to each other.

My mother has all of the love letters my dad wrote to her during WWII. She's never allowed us (kids) to read them but I like knowing that she has them.

So how long has it been since you last wrote a letter? I've found that it's easiest for me to do this if I incorporate it into my other paperwork. I try to write 1 or 2 notes to family or friends at the same time that I sit down to pay bills. The notes don't have to be very long in order for them to be meaningful to the receiver. Postcards are good too. It doesn't take but 2 or 3 sentences to fill up the space.

So, do you need to purchase some new stationary supplies? I bet there's someone that would appreciate hearing from you. All it takes is just a few minutes of your time and a stamp.
Posted by Nancy at 9:25 PM

I am bad at sending notes, even thank you notes. Yet there is nothing better than getting a hand written card in the mail box.

Nancy-
I came over from Meg's blog - Whatever.. I'm her mom that was in the pics. I know Sue well. Be sure to tell her hi from the Ranneys. And give her Meg's blog address. I think she'd get a kick out of it. Tell her I've been reading Riann's blog and thinking about her.

Thanks - what a small world.

I just found your blog and wanted to add a note to this entry as I read "backwards". As a retired Postmaster of a small Kansas community, I can tell you that very few personal letters are written in this day and age. It never ceases to amaze me given the inordinate amount of pleasure that I was honored to witness as people of all ages and walks of life pulled those precious words from their mailboxes.