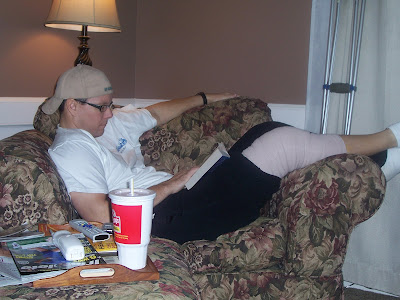 Lawman had orthoscopic knee surgery yesterday -- repairing a torn meniscus. Yesterday it was his right knee, 10 years ago it was his left knee.

Honestly, it's no wonder this guy has had to have this done. He expects an awful lot from his body. More than the average guy.

In 1996 he made a goal for himself to run a 5k. It's escalated from there to include 10k, half-marathons, marathons (the reason for the first surgery), triathlons, half-ironmans, and adventure racing. You get the idea. He's not one to sit at home. Not to mention that before he did any of the above he was in the Army, a combat veteran. Running in boots with a 60lb. rucksack on your back isn't easy anyway you look at it, nor is it easy on the knees.

As challenging as all of the above activities may sound, I think the challenge he's facing now is the most difficult for him. It would be called taking it easy and recovering. Already I've seen signs of boredom setting in and he's barely been home for 24 hours.

He's off work through the end of January. Just how is he going to pass the hours and days? A guy can only watch so many movies/t.v. shows or read so many books. I'm hoping some of his buddies will take turns coming by and entertaining him.

His friend, Bart, who is married to this gal, is picking him up in the morning and taking him downtown for their weekly coffee. Maybe this is the beginning of something good.
Posted by Nancy at 12:16 PM

He should start a blog. Heh heh heh

The poor man... doesn't look as if he's being babied at all... with a tray full of everything he needs for a restful day... put there, no doubt, by his adoring wife!

yeah, I like the blog idea too. I'm mean we manage to keep one up even though we are never home much, he certainly should be able too!

Nancy: I hope the law isn't driving you nuts. And of course I hope he's feeling good, too.

Thank you all for your well wishes for Lawman. Bart showed up with several movies for him today. Personally, I think having a few weeks off to watch movies and read books sounds like a pretty good deal.