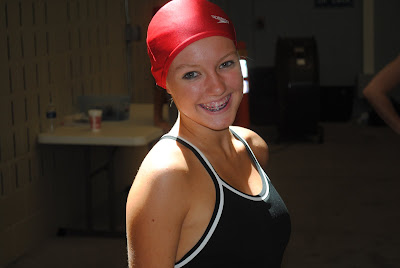 SHE is the reason I do what I do. Years ago, the oldest girl was a reason too.

It's been 11 years since we joined the team. The first 2 years I was on the sidelines. And then someone asked if I would help and I said yes. Then a couple of years later the team had a hard season and was lacking leadership. Two moms asked if I'd be willing to step up to the plate and help them rebuild the team. I said yes. Again. But I had a good reason -- two girls that loved the sport. I couldn't imagine the opportunity not being available to them the next season. It took a couple of grueling years but we did it. We went from a team of 23 to a team of 70. Now we average about 60 swimmers each season. That's a lot of reasons.

The oldest girl decided last year that she didn't have time for swim team. There were too many other opportunities for a 16 year old girl that wants to earn money in the summer. She became a cheerleader on the sideline for her sister.

The youngest girl still has a passion for the sport. She's sure that she'll do it again next year. As for me, my role is going to change. With a high schooler on the team, I consider myself to be "on the way out." Next year, I'll still be Clerk of the Course. I'll be a resource but I'm passing the baton. It's time for someone else to learn the ropes and lead the way.
Posted by Nancy at 8:20 PM

and she is even cute in a swim cap. What about you - do you swim? maybe you should do a mini triathlon!