because they're worth it.

i hate to say it but i will. we've been busy. just like everyone else. no way around it either. we've been busy with things that i don't feel like i can just say no to. i know a certain someone in my family would say that i'm busy by choice. well that may be but that choice started long ago. with children. 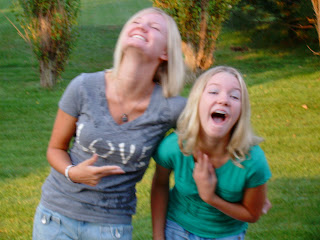 this week we had ballgames on monday and tuesday. i don't have a girl that plays ball but i have a girl that dances at half-time for our entertainment. now you know why i spend hours each week sitting on gymnasium bleachers. might i add that they are highly uncomfortable and my bum hurts because of it.

wednesday was a fun day. our oldest girl accepted a scholarship for college. all day event. well worth it. wouldn't have missed it for the world.

wednesday night - book club with my girl friends. again, totally worth it. sometimes i crave that literary stimulation.

yesterday was a blessing. major snow storm. school released early. ballgame cancelled. an answer to my prayers. i was home last night. first meal i cooked in days and my youngest helped me in the kitchen. best part was that she chose to help, i didn't ask. we made comfort food; biscuits and gravy.

let me just keep it real here and say that because we've been on the go constantly from sun-up to well past sun-down, we've eaten less than quality meals over the course of a week or more. and it shows in the way i'm feeling and in what the scale says. we'll get back on track next week.


tonight is about me. a hair appointment immediately after work. cut & color. because i'm worth it and i need to hide the gray. again, totally worth it. it's been over 18 months since my last color. enough said.
tomorrow is about them. the girls. an entire day blocked out for prom dress shopping with 3 friends and 2 other moms. again, i know it will be totally worth it. a memory maker.
sunday is supposed to be a day of rest. however, given the above, it will be a day of work around our home. groceries. laundry. and the usual cleaning. the house is a wreck. it looks like we've been gone every day and every night. deal with it. i put my blinders on and smile.

the last couple of weeks haven't been ideal but i know it's only a phase. i chose to be a parent and i am choosing to be involved. if my house is messy and we don't eat the best meals for a few days, so be it. that's what happens when 2 working parents decide to be involved. we deal with it. make the most of it and move on. because they're worth it. and they'll be movin' on before we know it.
Posted by Nancy at 4:38 PM

You are a fabulous parent (you too Lawman). so many choose to watch their kids come and go but not participate. Not you - you are right in there. And, enjoying the moment.

I don't like to be busy, but I'm realizing with every passing day that being the kind of mom I want to be involves me putting aside my selfish desires and doing the hard thing. These years are FLYING by and I'd rather not look back on them with regret that I didn't try harder or do more. I get it. Your post really speaks to the place I find myself in these days...

Ditto Denise. Love your post - and totally agree. You're at a phase in your life where you are living in the moment, and that's exactly where you & your family need to be.
My parents raised my sister & I exactly like that, & I can only hope to do them justice with my own two boys. My mom talks about our high school years with total & complete fondness, despite the fact that I know she was run ragged.

You have it exactly right, Nancy. There is a finite period of time when your girls are home. And it goes FAST. Enjoy every minute. The dust, laundry and all the other chores are infinite..and they'll always be there, even when the girls aren't!

Case in point: My married oldest daughter is moving to Florida. I'm crushed. But it's a career move for her hubby. We'll have to make the best of it. Wasn't it just yesterday when she was starting kindergarten????? Sigh.

You'll never get this time back...soak it up :)

we are busy here too, in the good way. i love hearing about what you guys are doing, and your daughters are beautiful :)

just proves to me that working moms are just as effective as sahm! I absolutely love this post - the no guilt, the this is our life and its a GOOD life, that your girls are so wonderful. I read so many other blogs that seem to attack working mom's. your post rings so true - thank you.

as chaotic as your life feels, from your post it sounds like a ton of fun at your house!

thanks to all of you for your kind words.

@Anonymous~can't tell you what a smile your comment brought to my face. thanks!