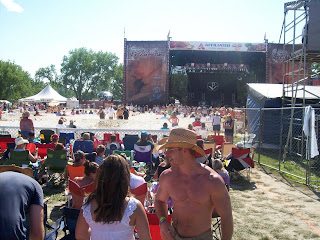 This photo doesn't even begin to do justice to what I am about to share.

120,000 + people
4 days
country music
Each year in late June, Country Stampede comes to town. It's been this way for 13 years.
It's loud, it's hot, it's something I have avoided for 11 of those 13 years.
For the last 3 or 4 years, I've had multiple requests (read begging) from my girls to take them. Not because they are big country music fans but just because it's 'the thing to do.'
I've avoided it for several reasons. 1) Lawman and I went on a Saturday night about 4 years ago with VIP tickets. I couldn't believe the things I saw and we were in the "nice" section. 2) Lawman's been working it now for the past 3 years and let me just say that from the stories he tells, it's no place to have your sweet teenage daughters. Stay out of the camp grounds and avoid the Friday and Saturday night unless you want a real eye-opening experience. 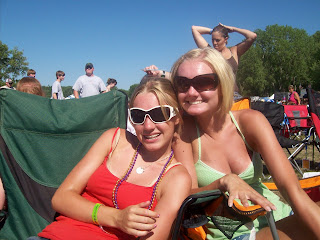 This weekend Lawman and I caved. He could get free tickets to the Sunday afternoon performance so I told the girls I'd take them. You should have seen their smiles. Score one for Mom & Dad! 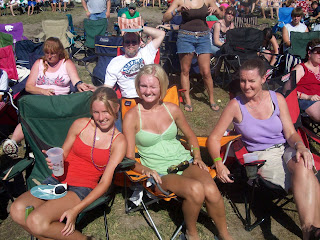 It turns out that Sunday afternoon was better than I thought. The music was good. The crowd was on their best behavior. I was pleased. The girls were disappointed. They were expecting it to be rowdy. I'm sure that's based on what they've heard from their dad. They were ready to go home after the 3rd act performed. Fine with me. I had already scored loads of brownie points.

On our way home they asked if this would be considered country music's version of Woodstock. I laughed and said, "Yes, I suppose you could say that except that Woodstock was all about free love. That's not the case here given what we hear from Dad."
Posted by Nancy at 7:19 PM

I just saw the girls the summer before last at my dads wedding. I cannot believe how much they have changed! They are gorgeous! Uncle Dale has to have his hands full! :)

You are officially the fun mom :) LOVE it!

way to cave. your daughters are so gosh darn cute! Looks like it was a fun day and so cool that you went all together. You like country music? I'll try to forgive you of that : )

dmoms ~ I wouldn't consider myself a country music fan. I can take it in small doses. Country was all my folks listened to when I was growing up. The 2nd act that played was the Belamey Brothers and I remembered their songs from the early 70's as some that my folks liked. Funny but I could sing every word and I hadn't heard them in 30+ years!

I'm sure the girls had a blast. That and the fact that there were no brawls or funny business makes it a win for everyone.

"That's not the case here given what we hear from Dad." Wow. I had no idea. I think we'll steer clear of that event. Good for you for taking the girls so they could enjoy it supervised.

way to go Mom. I think it's so funny that they built it up so much that it didn't live up to their expectations. still looks like you all had a good time.

i can't imagine where you are right now. keeping them safe but letting them branch out...yikes!